The Vishnu Purana (The Complete Series)
by Horace Hayman Wilson

"The Vishnu Purana is a primary sacred text of the Vaishnava branch of Hinduism, which today probably has more adherents than any other. It is one of the canonical Puranas, a branch of post-Vedic sacred literature which was first committed to writing during the first millennium of the common era. Like most of the other Puranas, this is a complete narrative from the creation of the current universe to its destruction. The chronology describes periods as long as a hundred trillion (1014) years! It includes extensive sections on the genealogy of the legendary kings, heroes and demigods of ancient India, including those from the epics, the Mahabharata and Ramayana. There are fascinating descriptions of ancient Hindu cosmology and geography. Of general interest is a collection of stories about the boyhood adventures of Krishna and Rama, whom the Vaishnavas believe to be avatars of Vishnu. There are also references to Buddhism and Jainism, which help establish the date of composition of the work."

The literature of the Hindus has now been cultivated for many years with singular diligence, and in many of its branches with eminent success. There are some departments, however, which are yet but partially and imperfectly investigated; and we are far from being in possession of that knowledge which the authentic writings of the Hindus alone can give us of their religion, mythology, and historical traditions.

From the materials to which we have hitherto had access, it seems probable that there have been three principal forms in which the religion of the Hindus has existed, at as many different periods. The duration of those periods, the circumstances of their succession, and the precise state of the national faith at each season, it is not possible to trace with any approach to accuracy. The premises have been too imperfectly determined to authorize other than conclusions of a general and somewhat vague description, and those remain to be hereafter confirmed or corrected by more extensive and satisfactory research.

Invocation. Maitreya inquires of his teacher, Paráśara, the origin and nature of the universe. Paráśara performs a rite to destroy the demons: reproved by Vaśisht́ha, he desists: Pulastya appears, and bestows upon him divine knowledge: he repeats the Vishńu Puráńa. Vishńu the origin, existence, and end of all things. 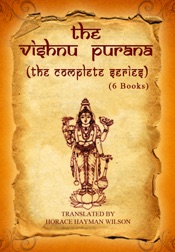