Divine Message Of God To Mankind Vedas
by J.M. Mehta
This book, Divine of Message God to Mankind VEDãS is an outcome of a deep study of the main teachings of the four Vedas and broadly contains their essence. The meaning of VEDA is KNOWLEDGE. The teachings of the Vedas represent the original knowledge believed to have been given by God to mankind, at the time of creation. The four Vedas – Rig, Yajur, Sama and Atharva are the fountain head of ancient Indian philosophy, traditions and practices. The Vedãs are supposed to contain all true knowledge in seed form. It is enjoined upon mankind to study, understand, develop and propagate this knowledge for individual and universal welfare.
The VEDIC KNOWLEDGE is the key to material as well as spiritual happiness. This small book is a sincere attempt to propagate the main teachings of the Vedas which are DIVINE INSTRUCTIONS for all mankind.
About the Author:-
The author, J.M. Mehta, has been devoting much of his time in reading and writing. He has a deep interest in spirituality in general, and in ancient Indian philosophy in particular. In spite of his advanced age and health problems, he is engaged in the regular study of scriptures relating to Hinduism.
Having built up a treasure house of thoughts, writing on related topics has become a mission of his remaining life. The style of his writing is simple and concise.
PUSTAK MAHAL has already published five of his books: The Wisdom of the Gita, Decent Jokes, Essence of Maharishi Patanjali's Ashtang Yoga, Four objectives of Human Life and Four Spans of Human Life which are worth reading. 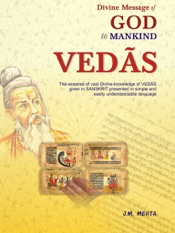