There is no word of wider content in any language than this Sanskrit term meaning 'Power'. For Shakti in the highest causal sense is God as Mother, and in another sense it is the universe which issues from Her Womb. And what is there which is neither one nor the other? Therefore, the Yoginihridaya Tantra thus salutes Her who conceives, bears, produces and thereafter nourishes all worlds: "Obeisance be to Her who is pure Being-Consciousness-Bliss, as Power, who exists in the form of Time and Space and all that is therein, and who is the radiant Illuminatrix in all beings."
It is therefore possible only to outline here in a very general way a few of the more important principles of the Shakti-doctrine, omitting its deeply interesting practice (Sadhana) in its forms as ritual worship and Yoga.
Today Western science speaks of Energy as the physical ultimate of all forms of Matter. So has it been for ages to the Shaktas, as the worshippers of Shakti are called. But they add that such Energy is only a limited manifestation (as Mind and Matter) of the almighty infinite Supreme Power (Maha-Shakti) of Becoming in 'That' (Tat), which is unitary Being (Sat) itself. 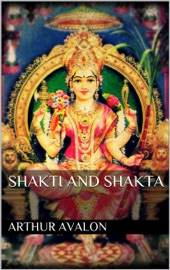