“A true insider’s perspective on the 2004 Red Sox” and their World Series win, from the bestselling author of Curse of the Bambino (USA Today).

On October 27, 2004, the Red Sox won their first World Series Championship in eighty-six years—breaking the infamous Curse of the Bambino and giving diehard fans the thrill of a lifetime.

Reversing the Curse preserves one of the greatest stories in sports history with an absorbing account of the team—a raggedy lineup of motorcycle-riding, whiskey-drinking rogues—and the key events that led to their incredible championship victory. A more epic sports saga could not have been invented: Here we have the curse that began with Babe Ruth; a team of comeback kids determined to prove their mettle; the perennial rivalry against the Yankees; and a historic win that was celebrated around the world.

Dan Shaughnessy captures the Sox triumph in all its drama and euphoria with penetrating insight, a keen sense of history, and unparalleled insider access. With photographs by the Pulitzer Prize–winning photographer Stan Grossfeld, Reversing the Curse is the definitive record of a landmark moment in baseball history.

“[Shaughnessy is] adept at capturing the mood, the emotion, the palpable feel of the Boston-New York showdown.” —The New York Times

“In story after story of near-triumph, the book should delight the team’s most fanatically loyal followers.” —Publishers Weekly 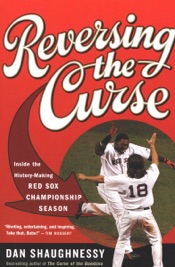